New Delhi: Indian Army’s Director General of Military Operations (DGMO) Lt Gen A K Bhatt on Monday told his Pakistani counterpart that any attempt by the Pakistan military to resort to unprovoked firing along the LoC in Jammu and Kashmir and abet infiltrators would be met with “appropriate retaliatory actions”.

A statement from the Indian Army on Monday said the Indian DGMO spoke to his Pakistani counterpart after a request by Pakistan, and discussed the current situation along the Line of Control.”DGMO Indian Army conveyed his commitment to ensure peace and tranquility which is contingent on Pakistan Army’s intentions and actions,” the statement said.

“If Pakistan Army continues to abet infiltrations and cause cross LoC firing, the Indian Army would take appropriate retaliatory action,” it said.

“Needless escalations” by the Pakistani side were highlighted.

When Pakistan raised the issue of civilian killings, the Indian DGMO said the Indian Army is a professional force which does not harm civilians in any manner.

“Indian Army is a professional Army and we will not harm civilians in any manner,” Lt Gen Bhatt told his counterpart. 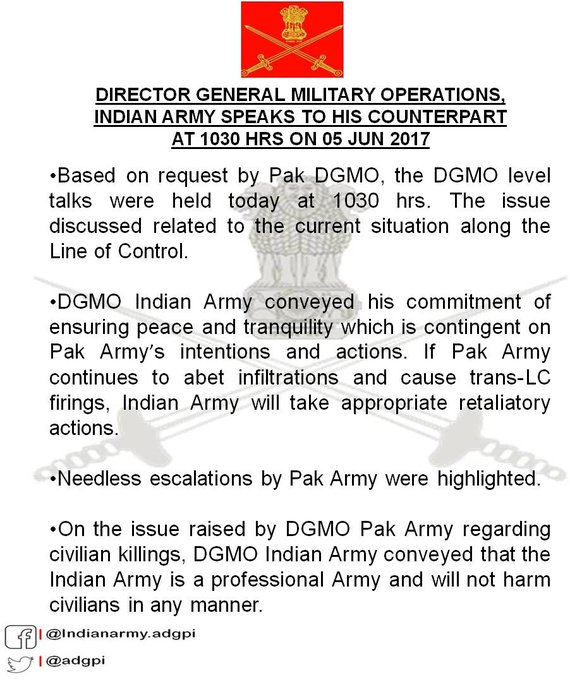 This comes as tension continues to simmer along the India-Pakistan border, with several ceasefire violations being reported in recent months.

On June 1, a civilian was killed and two others, including a BSF trooper, were injured in firing exchanges between Pakistani and Indian troops along the Line of Control (LoC) in Jammu and Kashmir.

On the same day, Pakistan also summoned the Indian Deputy High Commissioner in Islamabad over fresh ceasefire violations on the Line of Control, claiming that one Pakistani civilian was killed.

2 encounters break out in Shopian, Anantnag in Jammu and Kashmir

‘Sufi narrative needs to be transferred to the new generation’