Hyderabad: Prime Minister Narendra Modi will on Tuesday inaugurate the Global Entrepreneurship Summit in Hyderabad, which will also be attended by US President Donald Trump’s daughter and his advisor Ivanka Trump.The summit is being hosted for the first time in South East Asia by the Governments of India and the United States.

The inaugural session of the summit will be addressed by PM Modi Modi, Telangana Chief Minister K Chandrasekhar Rao and Ivanka.

Ahead of PM Modi and US President Donald Trump’s daughter Ivanka Trump’s visit to Hyderabad, security has been tightened in the city.

“About 2,500 security personnel have been deployed in three cordons. While everything is in place,” Commissioner of Police Sandeep Sandilya said. 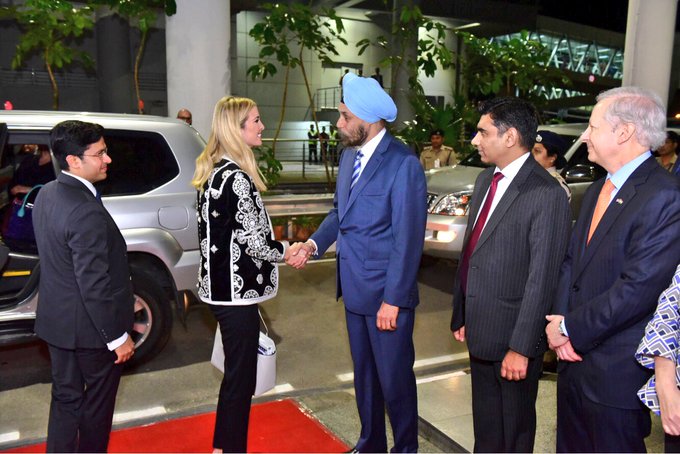 Warm welcome to a special guest. Advisor to the President of the USA @IvankaTrump arrives in Hyderabad. She is leading the US delegation to the eighth edition of Global Entrepreneurship Summit 2017

Ivanka will be part of a discussion on increasing women in the workforce through skills training, education, and mentorship on the second day.

Innovators in workforce development and training will discuss what works and what more can be done to open doors for women at the workplace.

PM had on Monday informed that he will inaugurate the GES Summit 2017 in Hyderabad today.

Tomorrow, PM @narendramodi will inaugurate the @GES2017in Hyderabad. The Global Entrepreneurship Summit is being held for the first time in South Asia. It is being co-hosted by the Governments of the United States and India.

Following this, a session will be moderated by John Chambers, Chairman Emeritus, Cisco. This will see the participation of Ivanka Trump, Sibongile Sambo, Managing Director of SRS Aviation and SRS Petroleum and Marcus Wallenberg, the Chairman of Skandinaviska Enskilda Banken (SEB).

The closing session of GES will bring together key influencers that support, promote and fund women entrepreneurs.

Panelists will share efforts to advance women in leadership positions and ensure that women have “seats at the table” while breaking down the barriers that disproportionately affect women’s ability to start and grow businesses.

It will also feature a panel discussion themed “Women Win, We All Win: Promoting Inclusive Environments for Women Entrepreneurs”, which will be moderated by Commerce and Industry Minister Suresh Prabhu.

The GES has introduced a mobile application to enable seamless networking among all registered delegates. A wearable device interlinked with the application is also being provided to all delegates for use during and after the summit.